Java Lava climbed Bukit Kaba (1,945 m), Bengkulu province, for the first time in May 2016 and again in 2018. Kaba is highly recommended for families with older children under close supervision. The mountain has a low profile – not a typical volcanic cone. Locally, Kaba is referred to as a bukit (‘hill’) rather than a gunung (‘mountain’). 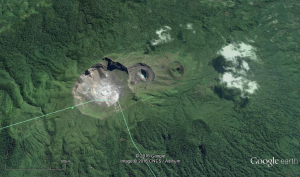 As Dan Quinn writes in Gunung Bagging, Bukit Kaba is … a truly beautiful and fascinating volcano complex. Given just how stunning the panorama is and how little effort is required to reap such a reward, it really doesn’t get any easier than this! Given its easy access and spectacular views, many visitors/campers can be expected on weekends. 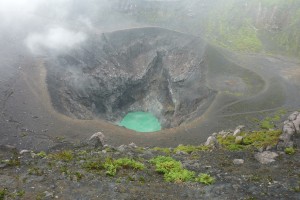 Bukit Kaba has a complex of some five craters trending ENE-WSW. The two most visited and spectacular craters are known locally as Kawah Hidup (‘live crater’) and Kawah Mati (‘dead crater’), separated by a low ridge. Kawah Lama (‘old crater’) lies to the ENE of Kawah Mati. Two ancient, forested craters lie to the WSW of Kawah Hidup. The highest point in the complex, 1,945 m, is on the forested crater nearer to Kawah Hidup (not at the lookout or rim of Kawah Hidup as is usually presumed.)

Treks include circumnavigation of the rims of Kawah Hidup and Mati, which can be extended to include Kawah Lama, as well as the descent to the floors of Hidup and Mati. With an early start, fit trekkers should be able to achieve all these in one day.

Circumnavigation of the rim offers great views into the craters as well as of peaks in the distance – weather permitting! The trek around the rim takes 2-3 hours and is not technically difficult although some bushwhacking may be needed in place.  Gunung Bagging informs that there are three high points in the complex – the outlook on the northern side, a high point on the rim to the west, and a peak on the southern side. These offer an understanding of the complex and great photography.

Descent into the Hidup and Mati craters is via a well-worn track on the eastern side of the rim of Mati, but you should have an experienced guide to find the point where the descent begins especially if the mountain is covered in mist. Alternately, if you circumnavigate the crater rim, you will descend into the craters from the western side: again, a guide is needed to show the route. Once ‘inside’ the craters, you can walk around the undulating floor of Mati and, after a short climb over a ridge between the two craters, around the flattish floor of Kawah Hidup.

Kawah Mati contains an extremely formidable volcanic vent with a spectacular turquoise lake at its base. Its last serious eruption was apparently in 1883. The vent is about 200 m deep with near-vertical walls. (Certain death if you were to fall in; your body would never be recovered; probably cremated in H2SO4 in the lake below! Perhaps that’s why the locals call it ‘Mati’ – death). 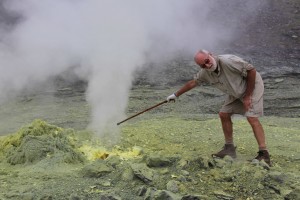 Approaching a fumarole with care

Kawah Hidup is fascinating for its numerous, very active steam-gushing fumaroles with sulphur solidifying around the bases of many vents. You can approach these vents but stay upwind to avoid the sulphur fumes. Follow the advice of your guide on where to walk.

The ascent begins at Pos Wisata (park entrance, 1,360 m, aka ‘kamp’); the fee is Rp 5,000, sign the register book, IDs were not requested. There are two routes: the ‘forest track’ (just over two hours), and a longer, more moderate gradient, asphalt ‘motorbike track’ (about eight km). Both lead to the base of the 200 steps below the lookout overlooking the two main craters. The vertical climb is about 600 m. The forest track is shorter, well worn and relatively easy (but would be slippery in rain). Apparently, there are plans to upgrade the motorbike track for cars to reach the base of the steps at the outlook.

If ascending via the forest track, there is a shortcut to the rim of Kawah Mati: on the left into a gully about 100 meters above a concrete block house (presumably for protection in the event of an eruption) after emerging from the forest. The track on the other side of the gully up onto the rim is clearly visible from the forest track. This shortcut avoids the need to ascend to the lookout and then descend again to the rim of Kawah Mati.

Camping: although possible, not recommended – not worth the effort of taking an early flight and carrying a porter pack.  Two sites: (1) at the base of the lookout, which also serves as a motorbike park. The ground is rock hard – difficult to insert tent pegs. (2) The ridge, below the lookout, extends from the forest track. Most locals camp here – it may be busy and noisy on weekends with limited tent sites. No permanent water on the mountain.

Suitability: not a difficult trek but potentially dangerous on the rim and in craters; a reasonable level of fitness; families and older children under close supervision.

Guides are advised for circumnavigation of the rim and descent into craters but are not really needed for the forest or motorbike tracks. On previous trips, we had guides arranged through our lead driver – they proved totally useless. We recommend that guides be arranged only through Pos Wisata at the park entrance. As their phone number no longer works, we suggest that the team leader visit the pos on the evening before the climb to make arrangements for guides. 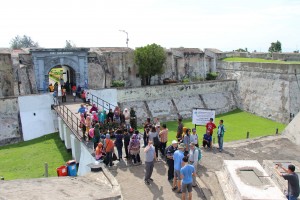 Indicative Program: A three-day trip is necessary to drive to/from Gn Kaba and spend one full day on Gn Kaba as well as visit historical sites around Bengkulu. Bengkulu sites include the British Marlborough fort built between 1713-19 and where Raffles was posted, 1818-24, after his tenure as Lt-Governor of the Dutch East Indies, 1811-16, and, Soekarno’s house where he was exiled, 1938-42.