Gunung Muria dominates the Muria peninsula on the north coast of Java to the east of Semarang in Central Java. The mountain complex is of ancient volcanic origin but erosion over the millennia has resulted in a series of intertwined precipitous ridges and peaks. Muria is quite unusual compared with other volcanic mountains in Java. 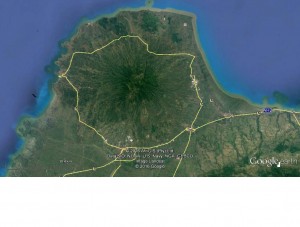 The highest peak, normally reported as 1,602 m, is know as ‘Puncak 29’ or ‘Songgolikur’ which, in Javanese, simply means ‘29’. Inexplicably, the true summit lies about 50 ms further north at about 1,620 m. The origin of the name, ‘29’, seems to be lost ‘in the mists of time’. Other prominent peaks include Klere, Natas Angin, Ambioso and Candi Angin. 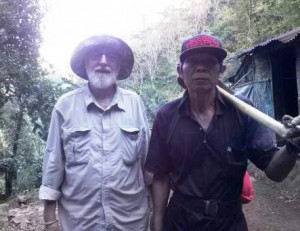 Gunung Muria has deep spiritual significance for those who live there. A ceremony is held on the Ambioso peak at Pertapaan (place of mediation) Eyang Pandu at the start of the month of  Suro of the Javanese calendar (new moon) corresponding with Muharram, the Islamic New Year (2 October in 2016). A Juru Kunci (translated loosely as ‘one who opens the doors of knowledge’) can explain the significance of the mountain and its places of mediation. 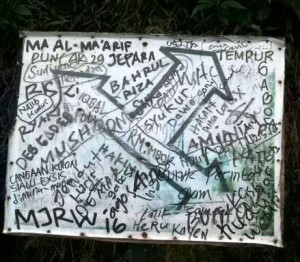 The region is also known for two of the nine Wali Songo, Islamic saints, who supposedly  brought Islam to Java – ‘fact shrouded in legend’. The grave of Sunan Muria, Syeh Umar Said, at Colo high in the next valley to the east of Rahtawu (trail head), is a major pilgrimage site. The other grave is that of Sunan Kudus, Jafar Shadiq, at Kudus. Kudus (Arabic, Qudus, meaning ‘holy’) is apparently the only town in Indonesia with an Arabic name. It is believed that both of these Wali Songo originated from the Hadhramaut, a region in southern Yemen. 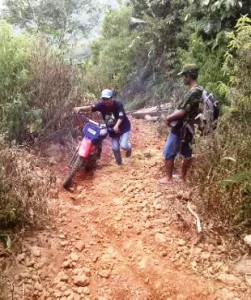 Weather permitting, Puncak 29 offers views of the mountains of Central Java and along the northern coastline. Merbabu, Merapi and Lawu may be seen to the south and the twins, Sindoro and Sumbing, to the southwest. The Java Sea coast may be visible with Jepara, renowned for its teak furniture/ carvings, lying below on the coast to the west. The little village of Tempur lies to the north nestling in the valley between the Puncak 29 and Candi Angin ridges.

Puncak 29 can be climbed from either Desa Rahtawu (700 m) on the southern or Desa Tempur (600 m) on the northern side. Most local climbers start at Rahtawu and return by the same route. A traverse from Rahtawu to Tempur, or vice versa, is quite possible in one day with the trail along motor bike tracks used by villagers to reach their coffee gardens – well formed and easy gradient making for pleasant trekking. The ascent of Puncak 29 involves a side trek from the main traverse route. From Rahtawu, the climb to Puncak 29 takes about three hours (vertical – 820 ms), and another three hours to reach Desa Tempur. A warung at Sendang Buton (1,157 m), is an hour from the Rahtawu trail head  – basic food and snacks and floor space for overnighters! A small hydro plant generates power for Sendang Buton and other warungs including that on Puncak 29. 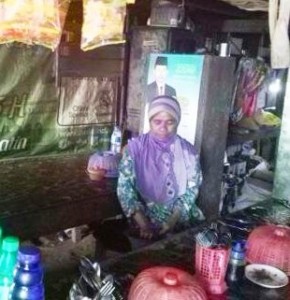 Ibu in her warung on Puncak 29

The final ascent of Puncak 29, from where the motorbike track ends (1,355 m), is quite steep along a knife-edge ridge (about 250 m vertical, 45 mins) with very steep drop-offs on each side – be careful! There are several rather uninspiring dwellings presumably for adherents, with courtyards containing some Hindu/Buddhist regalia, along the route to the summit. And, there is even a warung on the summit.

Desa Tempur lies high in a valley between the Candi Angin and Puncak 29 ranges – a beautiful setting with rice fields in the valley below. The turn-off to Tempur, if approaching from the Rahtawu side, is about half way between the end of the motorbike track to Puncak 29 and Sendang Buton. The descent takes about two hours along a rough motorbike track that, later, turns into a well-formed road. The vegetation is uninspiring – degraded forest, coffee plantations, sengkong, etc. 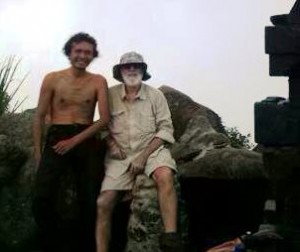 Suitability: The trek is easy; suitable for families and older children. But be careful on the final ascent of Puncak 29 on the knife-edge ridge – keep a close eye on children. Water is available in streams and warungs. Warungs serve snacks, noodles, coffee/tea, even at the summit. 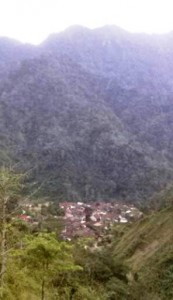 Indicative Program: details of climbs will be provided in Circulars to be issued by Java Lava at the time.

Sunday: tour Jepara (famed for its teak wood working) – visit factory/shops/etc.; Museum Raden Kartini (Kartini was born in Jepara and spend her ‘confinement’, puberty years, here until reaching the age of 16 when she was betrothed to the Bupati of Rembang); Dutch fort (source: Lonely Planet); return to Semarang for late afternoon flight to Jakarta.