Gunung Sumbing (3,371 m) is the second-highest peak in Central Java. It overlooks Sindoro and the Dieng Plateau to the north, Slamet to the west, and Merbabu and Merapi to the southeast. The Kledung Pass (1,404 m) separates Sumbing from its northern neighbour, Gunung Sindoro (3,150 m). It’s only known recent eruption was in 1730 but there are still active fumaroles in the crater. 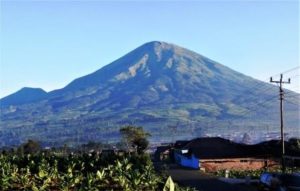 This profile should be read in conjunction with Gunung Sindoro. With an extra day after climbing Sumbing, Sindoro can be climbed by the shorter Sigedang route leaving time to return to Semarang for a late evening flight home on an extra day. Go to Sindoro for a profile of that mountain. 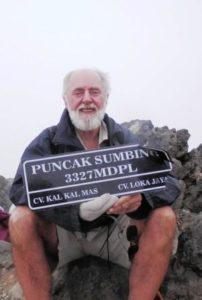 From Basecamp, the road leads up through Garung village and the trail begins at about 1,480 m. Sumbing is an almost perfect cone so the climb becomes increasingly steep towards the crater rim taking about six-plus hours over a distance of about seven km. The vertical climb is about 1,830 m.

The rim is reached at a point known as Puncak Buntu (3,308 m) and in good weather hikers are rewarded with tremendous views of surrounding mountains. The trail then descends into the large crater below with fumaroles on the southwestern corner.

The true summit of Sumbing is a steep rocky peak around the crater rim to the west of Puncak Buntu. This is difficult and dangerous to reach and should not be attempted without experienced guides and preferably ropes. 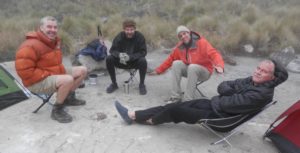 A very pleasant camp in Sumbing’s crater, after the exhausting climb! 2015

Java Lava normally camps in the crater but be careful to stay upwind of the fumaroles on the southeastern side of the crater. The crater area is quite expansive with plenty of places to camp on flat ground.

The descent, by the same way to Garung, takes about four and a half hours. But an alternative route to Cepit (Kajepit) on the Magelang side of the mountain makes for a more interesting return trek. This route is a bit longer but less steep. 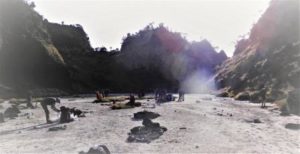 With an early start, you will down by midday with sufficient time to catch a late evening flight from Semarang.

This trip conforms to the classic Java Lava weekend. Fly from Jakarta on Friday afternoon to Semarang, then small busses, and check into Kledung Pass Hotel near the trailhead or a more upper-class hotel, Hotel Kresna, in Wonosobo (three hours by road from Semarang). 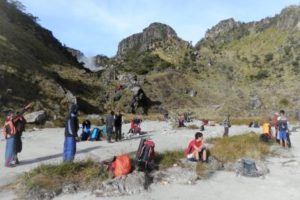 Crater with fumarole in the background, 2015

Porter packs should not exceed 15 kg. Bring your own provisions for the mountain including water (assume no water on the mountain). Rain gear, warm clothes, headlamp and whistle, and your own camping gear, are essential. Water (rule of thumb – 1.5 l bottles): two for the ascent, one for camping, one for the descent.

Suitability: Sumbing is a relatively tough climb due to its altitude and steepness – strong, fit climbers only.