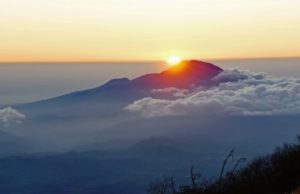 Gunung Sindoro (3,150 m) is the northern twin of Sumbing (3,371 m) separated by the Kledung Pass (1,404 m). Both can be climbed from Kledung village in an extended weekend. Hotel Kledung Pass (0813 2811 9888), on the saddle, is a convenient place to stay. The summit of Sindoro offers majestic 360-degree views of Dieng (Gunung Prau) to the north, Slamet and Ciremai to the west, and Sumbing, Merapi, Merbabu and Ungaran to the east.

This profile should be read in conjunction with Gunung Sumbing. With an extra day, Sindoro can be climbed by the shorter Sikatok/Sigedang route leaving time to return to Semarang for an evening flight home the next day. Since you already have your camping gear with you from Sumbing, a camp on Sindoro the next night works well. 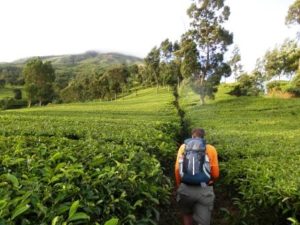 The usual route from Kledung Pass, on the southern side of the mountain, starts at 1,654 m. With a vertical ascent of about 1,500 m, this route would take about six hours. But as an ‘add-on’ to Sumbing, we recommend the much shorter Sikatok/Sigedang route on the northern side. This route has the advantage that you can start the climb at  2,217 m leaving only a vertical ascent of 1,023 m to the summit.

In 2019, two intrepid Java Lava climbers set off for Sindoro immediately after having descended Sumbing. The drive to Basecamp Sikatok (purchase tickets and arrange guides and porters here), though the tea plantations and to Pos II, at the trailhead, took 2:45 hours. 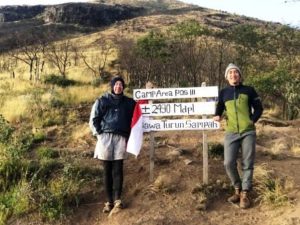 The climb to the summit takes another 2-3 hours. The crater is a real spectacle and, on this occasion, was very much active. A descent into the crater would be dangerous with all the sulphuric activity. 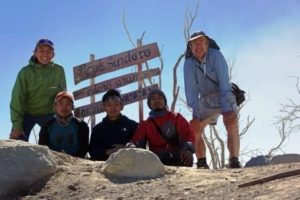 The descent to the trailhead, including breaking camp at Pos III, took three hours. Then by car back to Semarang with ample time to catch a flight home. 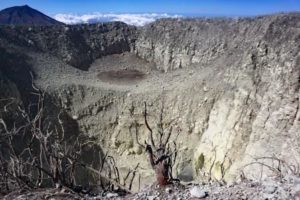 Gunung Bagging informs that much of the crater rim is of a very similar height. It takes only 30 minutes to circuit the crater rim so baggers don’t need to worry too much about missing the very highest point if they’ve had a wander around the crater edge! The edelweiss-covered summit area is very large and flat and the mountain apparently takes its name from the fragrant scent of the Edelweiss flowers.

Acknowledgments to Simon Reynolds and Trevor Sharot (2019), and  Gunung Bagging. 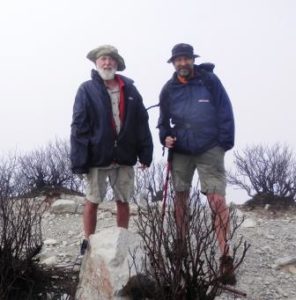 Nick and Steen in high winds somewhere near the summit – Edielweiss scorched from recent volcanic activity, 2015 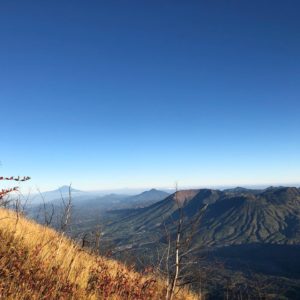